Pendal Group strengthened its financial position during the 2021 Financial Year through robust profit growth and the acquisition of TSW. Net tangible assets increased by 25 per cent to $454 million at 30 September 2021 while total net assets grew by 55 per cent to $1.4 billion. This solid financial base supports the Group’s ongoing investment for growth.

Cash held by the Group as at 30 September 2021 was $297.7 million (2020: $207.5 million) and represents a seasonal high for the business. Cash levels increased through the year due to higher profits and the acquisition of TSW.

Cash flows from ongoing operations are typically held for regulatory and working capital purposes, to acquire shares for employee share schemes, or to fund strategic initiatives including seed investments. Surplus cash above these requirements are paid to shareholders in the form of dividends.

Cash flows earned by overseas subsidiaries within the Group are held in foreign currencies – British pounds, Euro and US dollars – until repatriated to the Australian parent through inter-company dividends through the year. Those dividends remain hedged in Australian dollars until paid.

Seed investments are an important contributor to the Group’s future growth. Investments are made into new fund vehicles, as they establish an investment performance track record, as well as existing funds to provide scale as they become marketable to clients.

The seed portfolio is assessed regularly against targets related to investment performance and scale. Funds may be redeemed when fund size and maturity are achieved, or an investment strategy is closed.

In total, seed investments with a market value of $46.1 million were redeemed in the 2021 Financial Year.

Proceeds realised from redemptions were redeployed to support a number of new fund vehicles. They included four fund vehicles for the Regnan Global Equity Impact Solutions (RGEIS) strategy launched in the UK, European, Australian and US markets. Additionally the Regnan Sustainable Water and Waste fund was also seeded for the UK market. 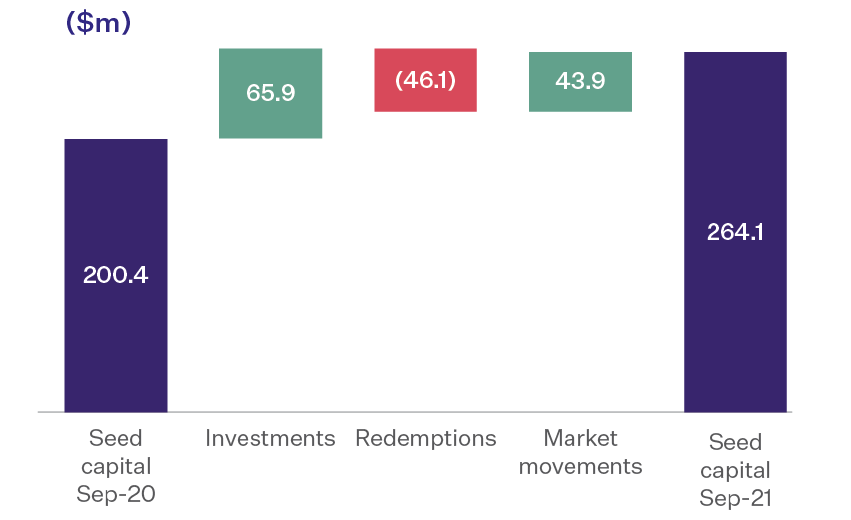 Pendal’s intangible assets increased to $930.2 million at 30 September 2021 as goodwill, investment management contracts, and trademarks were recognised on the acquisition of TSW. These added to the goodwill and management rights associated with the acquisition of JOHCM in 2011 and goodwill arising from Pendal Group Limited’s IPO in 2007.

The investment management contracts associated with the acquisitions of JOHCM and TSW are amortised over their expected useful lives. 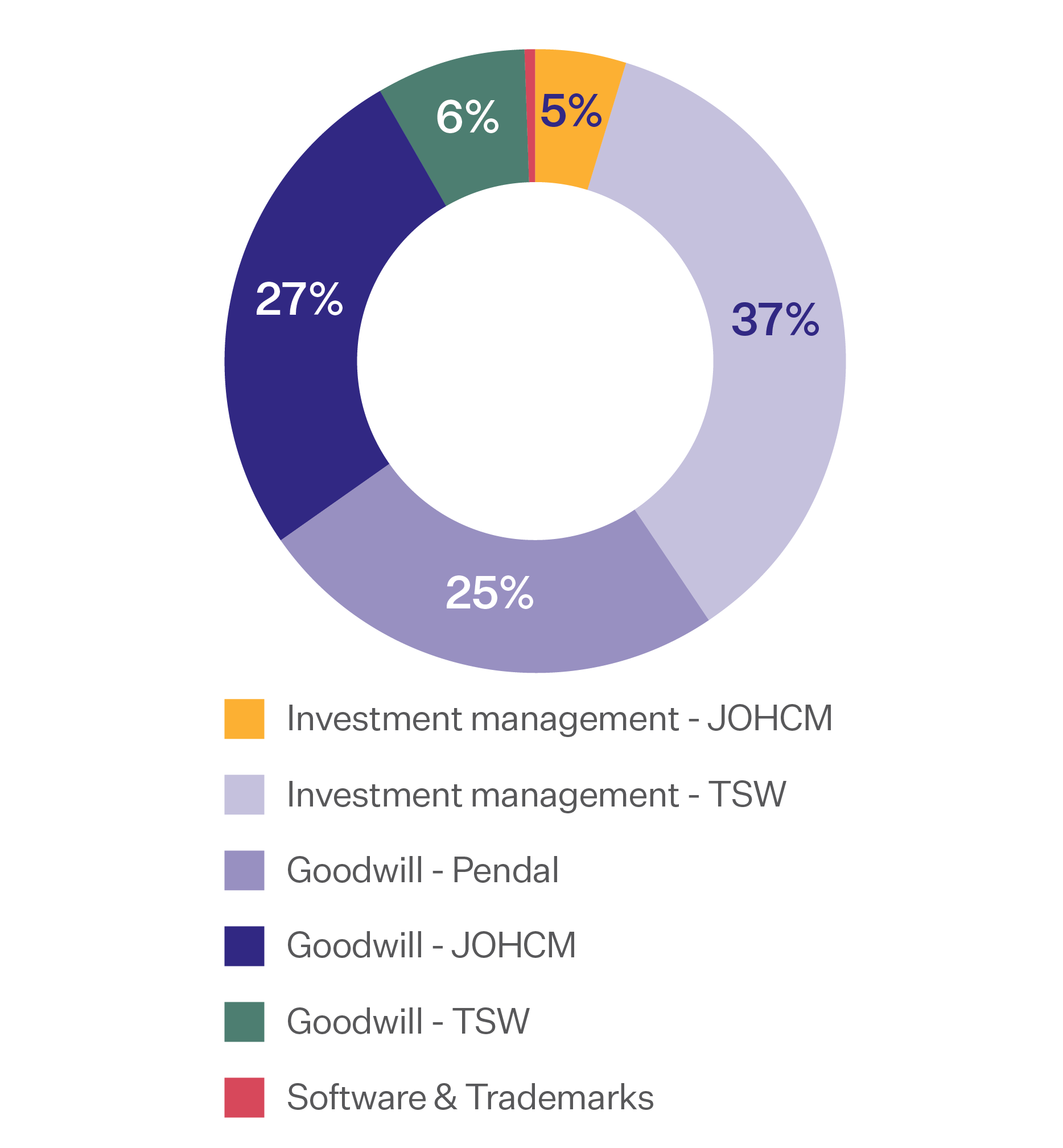 TSW is a highly successful complementary business which expands the Group’s growth potential in the US market and has created immediate value for the Group.

The Group entered into a US$35.0 million ($48.6 million) syndicated debt facility agreement for a three-year term to partially fund the acquisition of TSW. The facility was fully drawn on completion of the acquisition in July 2021.

A $25.0 million multi-currency revolving loan facility is maintained and remained undrawn throughout the financial year.

The Directors declared a final dividend of 24.0 cents per share (cps), bringing total dividends for the year to 41.0 cps, an 11 per cent increase on the prior year’s dividend of 37.0 cps.

Dividends are franked to 10 per cent, reflecting the significant proportion of the Group’s profit that is earned offshore. In accordance with the Company’s capital management plan, and to the extent possible, retention of franking credits is minimised. 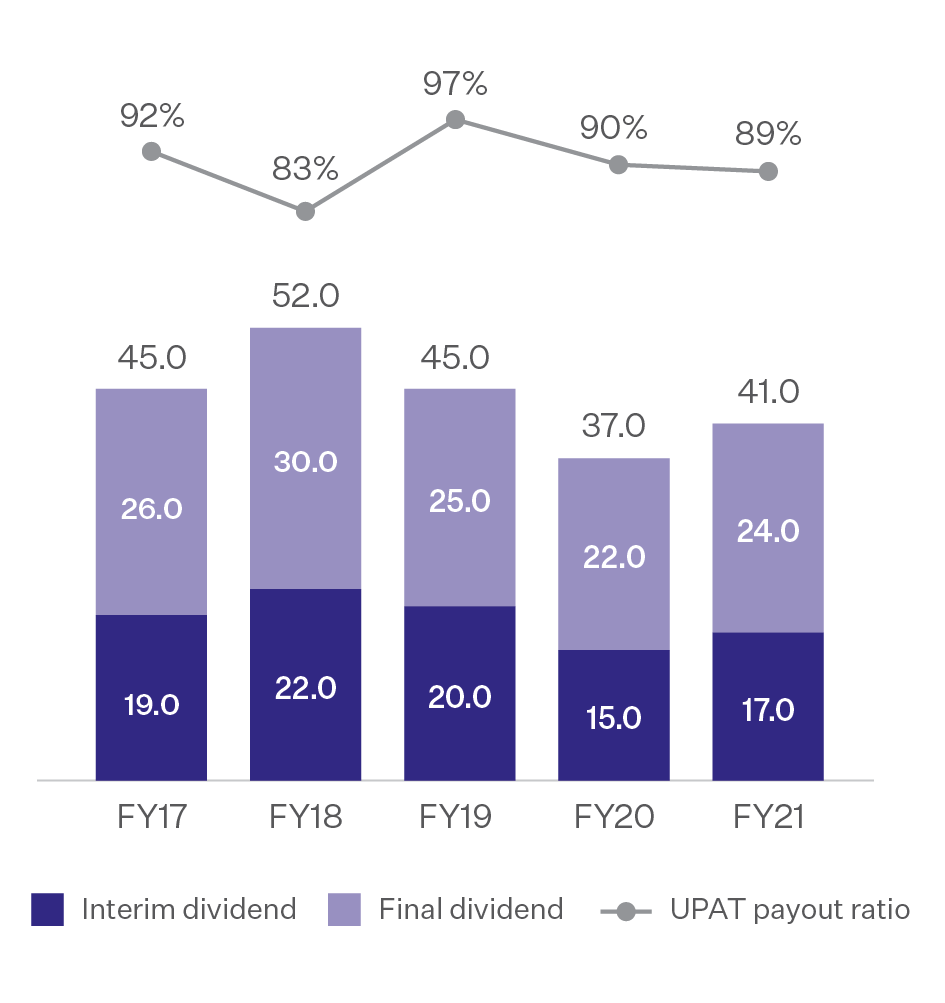